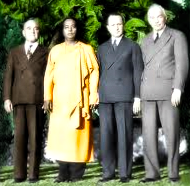 ay 5, 1892 A revolution began to take place in the Spiritual evolution of North America.  On that day James J. Lynn, Rajasi Janakananda, One of Paramahansa Yogananda’s main disciples was born

near Archibald, Louisiana.  Paramahansa Yogananda, the author of The Autobiography of a Yogi  and the founder of Self Realization Fellowship, was born Mukunda Gosh in Gorakhpur, India January 5, 1893.  Dr. Minnot White Lewis, Yogananda’s first American Kriyaban was born March 26, 1893, and finally John Oliver Black, Yogacharya J. Oliver Black, was born  in Grover Hill, Ohio September 1, 1893.  Swami Vivekananda also came to this country and spoke to the Chicago Parliament of Religions in 1983.  Vivekananda and Paramahansaji obviously called this band of disciples together to bring the science of Yoga to North America.

Of course, being Yogacharya’s disciple, I am prejudice when it comes to Yogacharya Oliver and such debate services no useful purpose.  However, it is widely accepted that Yogacharya was Yogananda’s second most developed male disciple after Rajasi. My intent with this website is two fold.  To give information about Yogacharya, his life, his work, and his wisdom and to make available hundreds of hours of recorded meditations, lectures, and Satsangas in Yogacharya’s own voice.  And video Satsangas recorded in the mid 1980’s at Song of the Morning.  I have preserved these recordings for over forty years, primarily for my own use.  But now with advances in technology and the internet I feel guided to

make this wisdom from Yogacharya available to all those truth thirsty souls and the weary, weak, and heavy laden ones that were so often drawn to